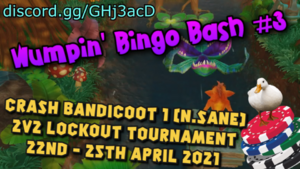 They will need to have the N.Sane Trilogy version of Crash 1.

They will need to have a save file that has the all levels unlocked with nothing collected.

Note: Goals cannot be done combined by 2 players, for example the goal defeat 3 bosses, player 1 defeatting 1 boss and the other player defeating 2 other boeese do not make the goal count as only one player has to do the full goal.

* Soshi didn't show up for the races the first day due to health issues so they were rescheduled to another day but on that second day Betas didn't show up and his reasons this time were not justified so his team The Prototypes got disqualified from the tournament.