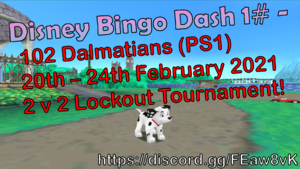 The tournament was announced by kolapro on the Disney Bingos discord server on February 8, 2021.

They will need to have the NTSC version of 102 Dalmatians: Puppies to the rescue.

They will need to have a save state or save file that has 0 puppies collected, 0 bones, 0 stickers from the 4 first pages and 2 lives.

They will also need to connect to https://bingosync.com as they will mark the goals they get themselves

For more information about the rules please check the rule book here:

There is no point allocation for draws, as the tie-breaker for getting the same amount of goals is who got the last goal first.
Retrieved from "https://wiki.ripto.gq/w/index.php?title=Disney_Bingo_Dash_1&oldid=23601"
Hidden category:
Cookies help us deliver our services. By using our services, you agree to our use of cookies.