Banner seen on SpyroSpeedruns relating to the event.

IAS 8 was the first RIPTO Tournament tournament which Ratchet5 had not hosted.

Ratchet5 felt that due to the performace of the tournament prior, IAS 7, as well as his mood at the time, that he would hesitate on hosting another I'm A Speedrunner Tournament. However, CrashBandiSpyro12 decided to take things into his own hands and uploaded a video to SpyroSpeedruns asking viewers to vote for the theme of IAS 8. Shortly afterwards, CrystalFissure, Nintendogen64 and TheAFH013 - all of who were competitors in previous tournaments - took on the responsibility of hosting the tournament, with Ratchet5 taking a backseat role.

As it was an IAS tournament, the past rules were inherited and used for IAS 8. One could debate though that these rules were not well-preserved and that there lacked adequate recording of what exactly those rules were. This is when the trouble began.

To Draw or not to Draw?

The tournament entered Round 3 and only 8 competitors remained. Amongst them were Ratchet5 and MuddyMaestro. The match was simple: if a competitor were to lose, they would be knocked out. If a Draw occured (based on certain time requirements), then a tiebreaker match would be done.

The match ended with a 24 second difference between the competitors' times (Muddy being the victor) -Ratchet5 declared that the match was a Draw (which Muddy agreed with), thus prompting the tie-breaker. Ratchet5 would go on to win the tie-breaker, and as far as Muddy and him were concerned, Ratchet5 was through to the grand final and Muddy was to compete in the Shaggin' Wagon.

On the same day, Ratchet5 decided he would quickly edit and upload the speedrun as they were the last people to do their match and also as Round 3 had been going on for many weeks. Ratchet5 further requested that MuddyMaestro not reveal the winners until both of their matches been uploaded, so that nobody would know the result before watching the match; however, Muddy did exactly that shortly afterwards.

CrystalFissure was eager to go ahead with the Shaggin' Wagon and so, on the same night, he gathered all competitors and started the match. Meanwhile, Angus watched the speedrun that had only just been uploaded (between Ratchet5 and MuddyMaestro) and believed that it was not a Draw and that Muddy had won, judging that the Draw time of 26 seconds was too long.

Ratchet5 was added to the Shaggin' Wagon call and didn't realise that the match was already underway. He scolded Muddy for telling the others the results and went to sleep.

The next day, CrystalFissure complained to Ratchet5 that the first match with Muddy should have been a loss and not a Draw. Ratchet5 said that if Muddy were to come online and declare himself the winner or request a best out of 3, then he would happily accept his request. This also brought up another question: if Ratchet5 was declared the loser, then should he not be given another chance like the others in the Shaggin' Wagon? CrystalFissure refused to do a match with Ratchet5 if he lost and Ratchet5 said 'Let's just wait for Muddy to come online'. 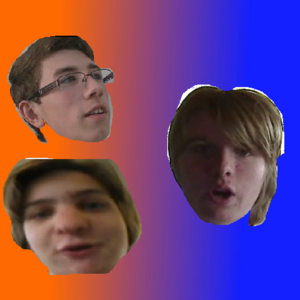 The main people involved in the IAS8 controversy

When Muddy did come online, he stated that he believed the Draw time to be suitable, that Ratchet5 was the winner and that he didn't want to do a final match. Ratchet5 was told that he was through to the Grand Final.

A day later, CrystalFissure spoke to Ratchet5 on Facebook and told him that Angus came up with the idea that he (Angus) would replace MuddyMaestro in the last match as Muddy did not want to compete. Ratchet5 completely refused and CrystalFissure said that they should get online and talk it out with he and Angooze (the hosts) about why he didn't need to do the match. Ratchet5 went on Skype and had a heated hour long argument with Angus about the rules. Angus claimed that 26 seconds was far too large for a Draw time and that Draws were only meant for very, very close matches (those between 5 and 10 seconds), despite the fact that the 26 second draw rule for Round 3 was stated in a speedrun the previous tournament, IAS 7 in which Angus agreed upon it.

Ratchet5 claimed that because he received phone calls during the speedrun (one of which affected his concentration and made him die), the 26 seconds was therefore suitable and that he did not implement the Draw when he was losing but rather when Muddy and he were at the same point in the speedrun. He also stated that the Draw times were never properly recorded and that even if the 26 seconds rule was too long, it was a stipulation of the match anyway given that Muddy agreed to it (per alleged IAS rules).

Angus disagreed, maintaining that one can not simply make their own stipulations with their opponent. Muddy, who was in the call, said that he accepted that the match was a Draw and also said that Ratchet5 deserved to go ahead to the Grand Final. CrystalFissure said that 'It would be nice if Ratchet5 raced Angus but I guess if Muddy says he deserves to go through, he should go through'. Ratchet5 left the call, thinking that he was through to the Grand Final yet again.

A few days later, CrystalFissure organised a race between TheAFH013, ShoReWol and Angus as a "Second Autistic Shaggin' Wagon" to decide who would race Ratchet5. When Angus won the match, CrystalFissure approached Ratchet5 and said that he was to race Angus despite his verdict the other day. Ratchet5 again refused and stated that he had quit the tournament.

Ratchet5: My new competitor is Angus?

The hosts of IAS 8, as a result, declared that Ratchet5 was to be banned from IAS 9, as this was the alleged rule regarding people who quit past tournaments. According to the inherited rules, one is not allowed to rejoin the following tournament when they are banned, unless there is a good excuse. The IAS 8 hosts banned Ratchet5 from IAS 9 under these rules, and therefore was banned from hosting it as well. They believed the IAS tournaments were not his "intellectual property" as they used the defence that it was a "community" tournament.

All IAS participants assumed that Ratchet5 would adhere to these rules and not involve himself with IAS 9, until a particular video was uploaded to SpyroSpeedruns (the main community channel where all general IAS news is usually uploaded).

In the video, Ratchet5 announced that he would be hosting a tournament titled "IAS? Nein!" - "Illigitimate [sic] Acquisition (of) Speedrunning? No!". He stated that the rules would be clearly laid out and that there would be one - and only one - "dictactor" who would determine what the rules are. He also implicitly called out the hosts of IAS 8 for "bending the rules". Which rules were bent is debatable to the extent that no rules may have been in place for the particular incident which caused Ratchet's dismissal from IAS 9.

The hosts of IAS 8 (Congooze, it should be added; TheAFH013 had expressed a desire to in fact join Ratchet's tournament) shrugged it off since it had nothing to do with the true IAS 9 and asked others to simply ignore this "unofficial" tournament.

This was soon followed up with a video from the then hosts IAS 8 stating their point of view on the rules. It mainly touched upon on the ban rule and Ratchet5's involment. They also respond to the convergence of IAS Nein! as the means to get back at them.

IAS? Nein! was soon abandoned by Ratchet5, who then attempted to take ownership of IAS 9 itself by uploading a voting video onto SpyroSpeedruns for IAS 9. CrystalFissure and Nintendogen64 then uploaded a video onto IASG8 discussing the situation and stating further that as Ratchet5 had been banned from IAS 9, he shouldn't be able to host it as well. The denizens of the Crass Community began to wonder what side to take (or if they should take any at all), with some thinking that the whole thing was getting out of hand.

During the next couple of weeks, Nintendogen64 and CrystalFissure persisted in speaking with Ratchet5 about the issue on Skype. Ratchet5 ignored them,believing them to be 'trolling'. Eventually, CrystalFissure and Nintendogen64 claimed that 'He's not defending himself because he knows that he's wrong'. Ratchet5 decided that he should defend himself and eventually drove him to upload a video to SpyroSpeedruns.

The video details his side of the debacle, as well as him noting that he is not friends with CrystalFissure and Nintendogen64 any longer with the reasons for which not being related solely to the tournament but due to more personal reasons.

He noted the fact that even though he had banned many people, he had neve rwent through with keeping them banned - except for personal reasons - while acting as tournament host, always unbanning anyone who were banned before the tournament started. CrystalFissure calls this a "convenient half-measure", stating that the only reason Ratchet5 is bringing it up that he unbanned people is to "save face". Ratchet5 stated that there was no precedence about banning as not one person who was ever banned for dropping out ever wanted to join a tournament. Ratchet5 also mentioned that he felt that CrystalFissure and Nintendogen64 were being unfair, which was the main reason he quit.

TheAFH013, regarding the rule of quitting and being banned for the next tournament, pointed to RabidWombatJR, upon whom the rule was indeed enforced. Ratchet5 stated in his defence that even if this were true, Rabid was banned in IAS 8, a tournament that Ratchet5 was not the host of, thus meaning that he had no hand in the decision.

The video comments soon started to appear moments after the video was uploaded debating on who is in the wrong but at the end of the surge of comments, the problems remained. A few days later, Ratchet5 gave up the hosting rights to I'm A Speedrunner 9, and focussed his attention on IAS? Nein!

Another video was uploaded some time later responding mostly to the comments on the last video. This includes the claim that IAS is a community tournament and who - or what - the hosts are.

Again, the video eventually lead to a flood of comments, this time almost exclusively between CrystalFissure and Ratchet5.

Ratchet5 near the end stated that he insists that IAS 9 content should not be part of SpyroSpeedruns and recommended using MultiSpeedruns instead. As the announcement for what channel IAS 9 would be held on was already uploaded by this point, it may not make a difference at all. Something to note though is that a number of videos detailing both IAS 9 and IAS Nein! had their channel link changed to only IAS Nein! exclusively. The link to the channel can still be found on the IAS 9 wiki page.

Retrieved from "https://wiki.ripto.gq/w/index.php?title=I%27m_A_Speedrunner_8_Controversy&oldid=21849"
Category:
Cookies help us deliver our services. By using our services, you agree to our use of cookies.