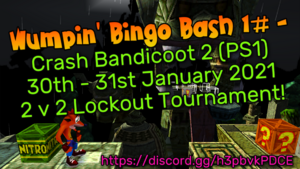 They will need to have the PAL version of Crash 2: Cortex Strikes Back.

They will need to have a save state or save file that has 25 Crystal collected, 0 gems and 4 lives.

* Due to TK having multipal technical difficulties and lack of time to reschedule the race Cotote & TK decided to give the win to Kola & Kingpez.

Retrieved from "https://wiki.ripto.gq/w/index.php?title=Wumpin%27_Bingo_Bash_1&oldid=23600"
Hidden category:
Cookies help us deliver our services. By using our services, you agree to our use of cookies.